A Progressive Alliance – What’s in a Name?

Many argue that the only chance of there being a Labour led government after the next elections is via a 'progressive alliance'. An agreement between Labour, Liberal democrats and the 'progressive nationalist' SNP and Plaid Cymru. Is this democratically desirable? If it is would be be possible to create one and what form would it take?

The think tank Compass has long argued that left of centre/progressive parties (Labour, the Liberal Democrats, the Green, and the ‘progressive nationalists’ SNP and Plaid Cymru) should form a ‘progressive alliance’ (PA).

Why a Progressive Alliance?

Supporters argue that on is needed because:

The precise form of a PA would is unclear. The concept tends to shape shift as discussions circle around ideals and tactics but broadly speaking can be located on a continuum, at one end the idea of a basic local and pragmatic ABC (‘Anything but Conservative’) tactical arrangement, where parties stand aside to give the candidate with the greatest chance a clear shot at the goal with only token opposition. At the other there is ‘PA max’, that is a formal national grand alliance between the parties, where a there is an agreement that single candidate would represent all the progressive parties. PA-max would be underpinned by a ‘common platform’ of shared commitments, particularly the introduction of PR[1]

A Question for Democracy

Progressives committed to deepening democracy face an important question, is a progressive alliance of whatever form ride roughshod over our already flawed democratic systems and can we, in conscience support the development of one?

Those questioning the democratic legitimacy of a PA make an important point, whilst FPTP is a deeply flawed system, and no matter how pointless voting for a particular party in some areas might be (see inverted power triangle below ) voters are able to decide for themselves if they want to support a candidate or vote.

These criticisms can be answered if.

Labour faces a stark reality. Put simply the Party is unlikely to achieve an overall majority in the next election. A simple majority of 1 will require a swing of 13.8%, this is bigger than what was achieved in 1945[2] And the proposed constituency boundary changes are likely to give the Conservatives an even greater electoral advantage[3] 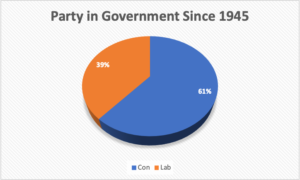 But the quirks of FPTP means that a swing of only 3.18% is needed for the Conservatives to lose an overall majority.

So if we want to see a Labour led progressive government, and alliance of some sort is needed.

Labour has always faced a huge electoral challenge. During the 75 years 1945 the Conservatives have held power for 46 years (61% of the time) against Labour’s 29 years.[4]

The Electoral Reform Society argues that if we had PR – for example the Single Transferable Vote System – progressive parties would almost certainly have had a majority in the last three out of four elections and possibly many.

A core argument against PR is that it would result in unstable government dominated by endless arguments. A progressive alliance would be paralysed through deep disagreement between the pro and independence parties.

Supporters argue that there are similar issues in Europe where PR is the norm. In fact the UK is an outlier, Belarus is the only other European country that supports FPTP, and Belarus has a dictator for president.  Indeed PR is the norm is much of the UK, used in the elections of the three devolved nations and the London Mayoral and Assembly elections.[6]

The Inverted Pyramid of Power

Whilst it seems the PR historically may favour the progressive parties, for democrats this is not   about seeking political advantage. The introduction of PR is a fundamental component of creating a better democracy. This inverted pyramid shows how deeply flawed and FPTP is as a democratic system. 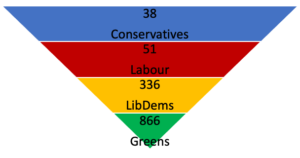 Can A Progressive Alliance Transform the Southern Blue Wall?

Tactical voting sometime works. Since the constituency was founded in 1974 Chesham and Amersham has always been blue but in June the Liberal Democrats achieved an astonishing bye-election victory, a 25 point swing turned a Tory majority of 16,223 to a LibDem majority of 8,025. The evidence was clear, the victory achieved by a coalition of disgruntled Tory voters combining with tactical voting from Labour, and Green supporters who support crashed.

This result follows a series of progressive gains across in areas the so called ‘blue wall’ area traditionally dominated by the Conservative.

The FPTP system masks an important reality, these areas are far less blue than they initially seem.  For example, in East and West Sussex the Conservatives dominate with 13 of the 16 seats.

But this is a fragile majority and in theory could be radically changed via tactical voting or a PA.

East Sussex has three constituencies where tactical voting, or electoral agreement could succeed in toppling the incumbent conservative MP with relative ease:

West Sussex also has three constituencies where the Conservatives have a small majority requiring a relatively small swing to replace them:

However the idea that somehow all those voters supporting progressives party swinging en masse to a single candidate seems unlikely.

If seats like these, and many others across the country could be toppled through tactical voting why is PA needed?

There is a long history of tactical voting in bye-elections creating electoral shocks. In theory, given the small swing required for the Conservatives to lose their overall majority, in theory it could work in the next election. But it’s unclear if tactical voting has made a significant difference in a previous general election.

Is a PA Possible and Democratically Desirable?

To work and not seem anti-democratic those promoting PA-max argue that:

But is it possible to create one?

That depends on the form of the PA.

Today it seems highly unlikely that the Labour leadership would countenance promote the idea. It would require a change in the parties’ rules and the leadership and there is the distinct danger such a move would split the party.

Furthermore, is it possible to create a formal alliance, particularly within Scotland and Wales, between the nationalist and pro-union parties.

But as with the ‘nod’s as good as a wink’, arrangements deal between Blair and Ashdown in 1987, a soft PA is possible and may become increasingly likely if Labour’s ratings don’t dramatically improve.

A pragmatic stich ups perhaps, but without something extraordinary happening such as Chesham and Amersham replicated country wide, it would the only option for Labour and the other parties.

It is a strategy fraught with difficulties, success will depend on there being some sort of positive relationship between local official and members.  Even then a local deal can’t be guaranteed. For example, Lewes Council is run by an effective ABC progressive coalition between the Liberal Democrats, Greens, Labour, and some independents, with a formal agreement of rotating the council leadership and agreement on policies. However lately electoral support for the Greens has dramatically increased and the party is beginning to fancy its chances of overtaking the LibDems in the area.

At the beginning of this blog, I argued that whatever the arrangement any form of a progressive alliance must be based around democratic principles and a commitment by all parties for radical change. The electorate deserve something more than a political stich up.

Even if there was no formal electoral agreement, a common statement of intent on the creation of a green economy, the reform of care, education, addressing the housing crises and transforming our democracy would be very powerful.

Across the country local government cooperation and alliances are growing. Many local parties seem to be slowly changing from tight closed tribes to a tentative opening up.  Parties in places like Brighton and Hove, Lewes, Bristol, and Sheffield and Surrey are working together in a way unimaginable in the past. Perhaps the foundation for a more profound shift in the future.

[1] The development and implementation of the Beveridge report was itself a kind of progressive alliance, William Beveridge was a liberal as was economist John Maynard Keynes, both formed the foundation of the 1945 Labour Government.

[2] The swing to labour was 10.7%, the biggest since 1800, https://en.wikipedia.org/wiki/1945_United_Kingdom_general_election the second biggest postwar swing was a 10.2% to Labour in 1997. For a more detailed analysis of Labour’s problem see https://www.compassonline.org.uk/publications/we-divide-they-conquer-if-labour-struggles-to-win-alone-what-is-to-be-done/

[6] Something the current government is seeking to abolish

[8] The figures in ‘Already There’ (e.g. Lewes) indicate an existing majority for progressive parties, the -figure in Possible (e.g. East Worthing), indicate a slight minority support requiring a relatively small swing to achieve a majority)

Writer and campaigner for the creation of a more inclusive democratic system that enables citizens to be actively involved in the planning and decision making process. His long experience in community development convinced him that there is a viable alternative to our existing failing democratic systems. Creator of the deeperdemocracy.or.uk web site.

Writer and campaigner for the creation of a more inclusive democratic system that enables citizens to be actively involved in the planning and decision making process. His long experience in community development convinced him that there is a viable alternative to our existing failing democratic systems. Creator of the deeperdemocracy.or.uk web site.
Menu
Facebook Twitter