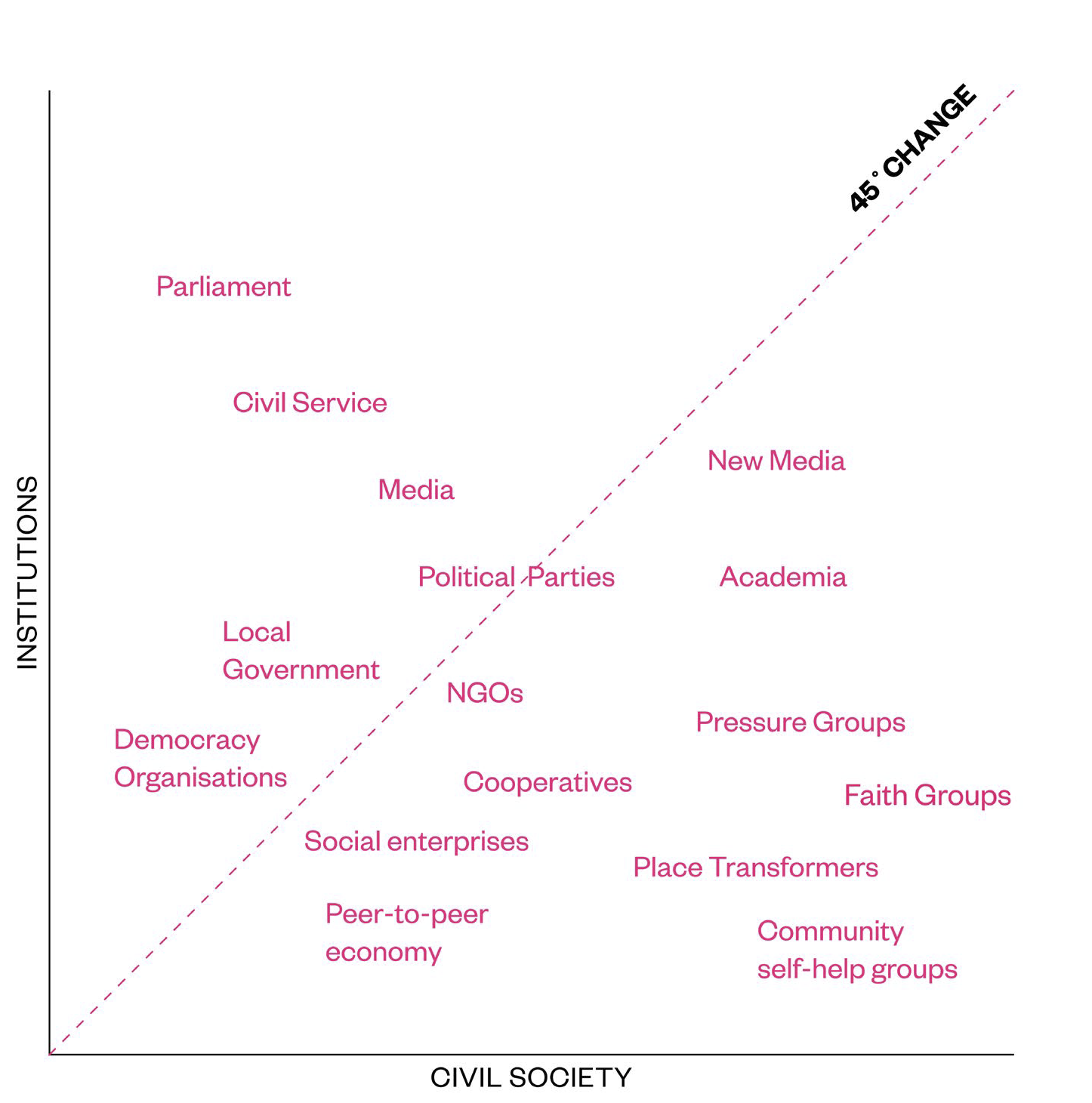 This pamphlet illustrates the breadth and depth of methods for stimulating citizenship activities which contribute to 45° social and political change. 45° change is a concept adopted by Compass to bisect the conventional image of top-down power and bottom-up disempowerment by focusing on the way that positive change can be driven by convergence of progressive forces amongst both citizens an institutions. This is the route out of the trap of tribal allegiances which drive people to one-sided factions and which result in dysfunctional government.

The 45° concept is new but has deep roots. While conventional politics is often conducted in crude soundbites, thousands of initiatives below the mass media radar, both locally, regionally and nationally, shape decisions through balanced deliberation and the direct participation of those who are most affected. Direct citizen participation makes for better decisions, better understanding of those decisions, and is itself a fulfilling and health-giving experience.

Much but not all of the experience is about local issues that rarely reach the headlines. But local issues are often microcosms of national and international issues, and many of the options for action are ultimately determined at a more centralised level. Participative methods are not, therefore, a substitute for sound national government but a vital supplement to it. To be credible, new constitutional arrangements to overcome the Brexit chaos and divisiveness must not only prevent abuse of democracy at the centre but energetically support emerging participatory forces. These are the bridge between central governance and inclusive deliberation which have been missing. Government and official bodies need to facilitate and work with participative organisations as equal partners, not only as auxiliary service providers.

Techniques and skills to elicit and organise participation, whether as one-off events or years-long projects, have been built up over decades by practitioners who are committed to these processes. The contributors to this pamphlet count themselves amongst these (but not as representative of them). There are important gaps, but we bring together a wider overview of this field than most people are aware of, and we look forward to other views and contributions.

Participatory practice is a source of skills and models for action to build the kind of radical change envisaged in Compass’ ‘Common Platform’ – a call for diverse creative and political initiatives to collaborate around progressive common ground. A collaborative approach to community organising across the UK is essential if we are to tackle the root causes of poverty and injustice.

Bob Rhodes was an Ernst & Young Social Entrepreneur of the Year (2003), leads on Social Services at The Centre for Welfare Reform, and is the author of “Much More to Life than Services” (2010).

Brian Fisher is a GP in SE London who has long championed the need for community development across the NHS and Local Authorities. As part of this commitment to giving people more control over their health and healthcare, he is also director of a software company that works within the NHS to offer people access to their own health record, a basic necessity for staying in control and staying as fit and well as possible.

David Wilcox has worked as a journalist, consultant in community engagement and partnerships, and for the past 25 years has explored how social technology can support community development and network building.

Diane Warburton has worked to support citizen, community and stakeholder participation in the UK for over 40 years; in the past 25 years specifically through evaluations and research to share experience and learn lessons from practice. Her research and writing has often focused on sustainable development issues including climate change, poverty and empowerment. Since 2005 she has specialised in evaluating and providing advice and guidance on national deliberative public dialogues for government departments and other public and voluntary organisations.

Gabriel Chanan is a researcher and theorist, mainly on community  development. Recent work includes an evaluation of one of NHS England’s ‘Healthy New Towns’, and an analysis of the potential of social prescribing in the context of the NHS long term plan – From Patients to Populations. He also runs a local theatre company.

Brian Fisher is a GP in SE London who has long championed the need for community development across the NHS and Local Authorities.

As part of this commitment to giving people more control over their health and healthcare, he is also director of a software company that works within the NHS to offer people access to their own health record, a basic necessity for staying in control and staying as fit and well as possible.

If you were appointed to advise a new government on a radical strategy for deepening democracy what would would be your advice?

Did the last Labour government contribute anything to empowering communities?

An important part of the Common Platform being developed by Compass is the creation of a vision of a ‘new democracy’ what should this contain?